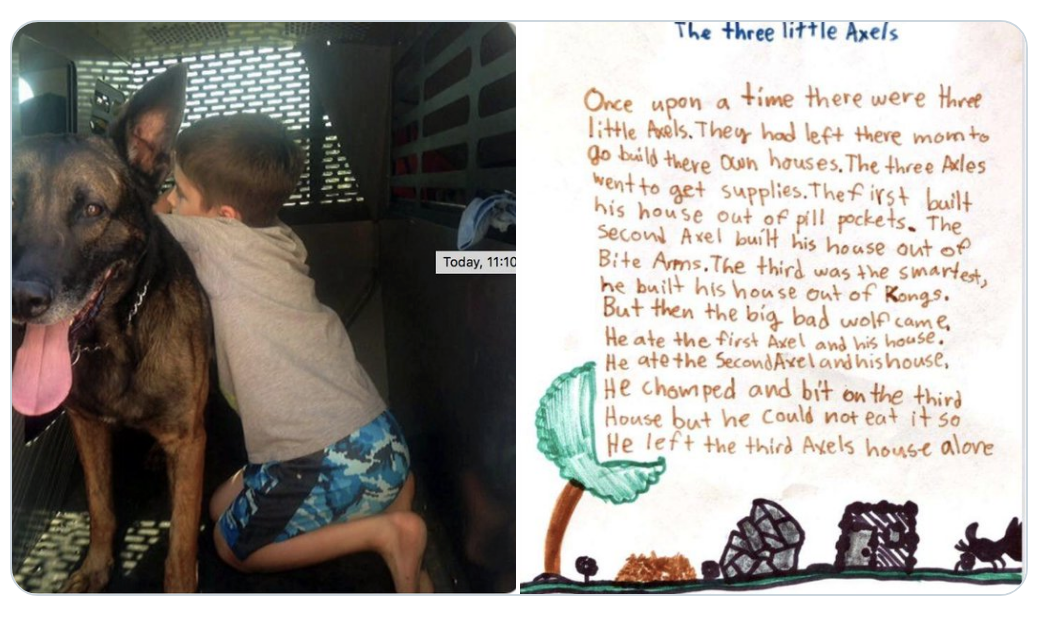 Over time, they began to vent their frustration at the demands for photographs from Sheriff Robert Chody, to include a near panic from the sergeant that they failed to get any photos from the funeral of another department’s K9.

They vented their frustration at the demands of LivePD, of being forced to appear for photographs, for being forced to give Chody the best photos of the K9s and keep the mediocre photos to post themselves.

They made remarks they would never have posted in public. But this was their team. The people they trusted, and their personal cell phones.

Sometime in March, Chody inexplicitly learned of the existence of the thread. We still aren’t sure who told him, but only three members were allowed to keep their K9s and were not either demoted or fired, although we are not making any assumptions. (Edit: It has been confirmed by a source close to the administration at the time this occurred that Sarah Cole Pence and husband Kyle Pence were the ones that shared the existence and part of the text thread with the administration. The text thread submitted confirms that Skinner and Stewart were fired before the thread was formally submitted. Attempts to obtain the interviews where Chody claims Stewart and Skinner lied have been thwarted by Chody).

I will focus on more of what happened to the rest of the team later, but at the moment I will inform you about what happened to Aaron Skinner, because of the upcoming retirement recommendation for Axel to be voted on at Commissioner’s Court on Tuesday, September 24th. (Axel was retired to Garretson and we believe him to be living with Garretson’s mom).

Aaron Skinner was K9 Axel’s handlers for about two years. During that time, Chody took the opportunity to use photos of Axel and Aaron’s son together on his Twitter feed. He called Aaron’s son Axel’s “little brother” and “family”. These are just a few of the photos from Chody’s Twitter account.

You can clearly the close bond between the two. We all understand that a K9 is a working animal, but even Chody, the sheriff, understood and encouraged the emotional attachment Aaron Skinner’s son developed with Axel, as Skinner worked for Chody at the Constable’s office for years prior to moving to the SO after Chody was elected Sheriff.

In February of 2019, Aaron’s K9 Axel was recommended to be retired. Aaron Skinner had noticed that he barked at things that weren’t there and his lack of stamina. The vet said it was common for a dog of his age and that his lack of peripheral vision could prove to be a liability. The sheriff refused to retire Axel.

Our understanding is that Aaron Skinner and Jeremy Stewart were the only two that were formally interviewed and subsequently fired. We have completed an Open Records Request for the interviews, to which every effort afforded to the WCSO has been taken to prevent that from happening. It is currently in the hands of the Attorney General. Other members report having an informal interview and at least one reports receiving an “Oral Reprimand”. Two of the K9s were removed and given to new handlers because, according to Chody’s Facebook post, they weren’t “remorseful enough”. The sergeant was demoted but retained his K9.

In an April interview with KVUE, Robert Chody accused Aaron Skinner and Jeremy Stewart of lying about the existence of a private text thread on their personal cell phones, along with the rest of the K9 unit. He claims that, had they been truthful, they would have only received an oral reprimand. Both employees disagree with his statement that they lied, and again, Chody has failed to produce the interviews despite several Open Records Requests. He actually blamed TMPA for retaliating against him for these firings by filing a sexual harassment complaint on the part of the deputies that were in the room at the time now resigned Steve Deaton made inappropriate remarks about the LivePD producer.

Recently an item was added to the Commissioner’s Court agenda to retire Axel, for the very same reasons he was recommended to be retired in February. Chody would like to sell him to the current handler, who has had him since March, for $1. The agenda item allows the court to bring K9 Axel’s retirement up for discussion. Any member of the court can make a motion to approve the item as proposed or can modify their motion. Court members can also table the motion and not vote in order to have time to get more information.

There is currently a petition for them to sell him to Aaron Skinner instead. We plead with the Commissioners to do the right thing. Sell Axel to Aaron Skinner and reunite him with Aaron Skinner’s son. (Edit: This item was removed from the agenda and Axel was retired to Garretson without discussion) .

In light of the recent agenda item, Aaron Skinner has decided that it is time for his side of the story is heard. The following in Aaron Skinner’s recently released statement:

I want to thank all of you recently for the support in light of the news of Axel’s retirement. He is being recommended for retirement for the same reasons the vet presented six months ago. When I saw people supporting his return to my family, I asked my son if he would like Axel back and without hesitation he said, “Yes!” While I informed him that this might not happen, we appreciate all your support and thank you for taking the time to read this. I understand dogs are county property and it is up to the commissioners to approve his retirement. I would hope the commissioners would do the right thing in this situation. I want to make known I do not hate Axel’s current handler or any other deputy at that agency. I have let go of everything that my family went through and I have forgiven those who sought to persecute others and me in that unit. I am by no means the only victim of this current agency One other handler was fired, our sergeant was demoted, and three other dogs removed from their families and handlers. Drago, Bolo, Axel, and Max were all removed from their handlers and families over a private text thread. I made some mistakes in language on a private text thread and for that I apologize to those who were offended. I personally never made homophobic slurs or made fun of mentally challenged kids as Chody stated to the media, I assume he was upset because I criticized his command and their decisions. I have the entire text thread just like many do. The reason I haven’t made an attempt to get it out is to protect those who are still in that unit, despite a few of them not making the same judgment call. Make no mistake about it; this was my private phone and how many of you reading this wants your boss to read your private text messages? Respectfully, Aaron Skinner