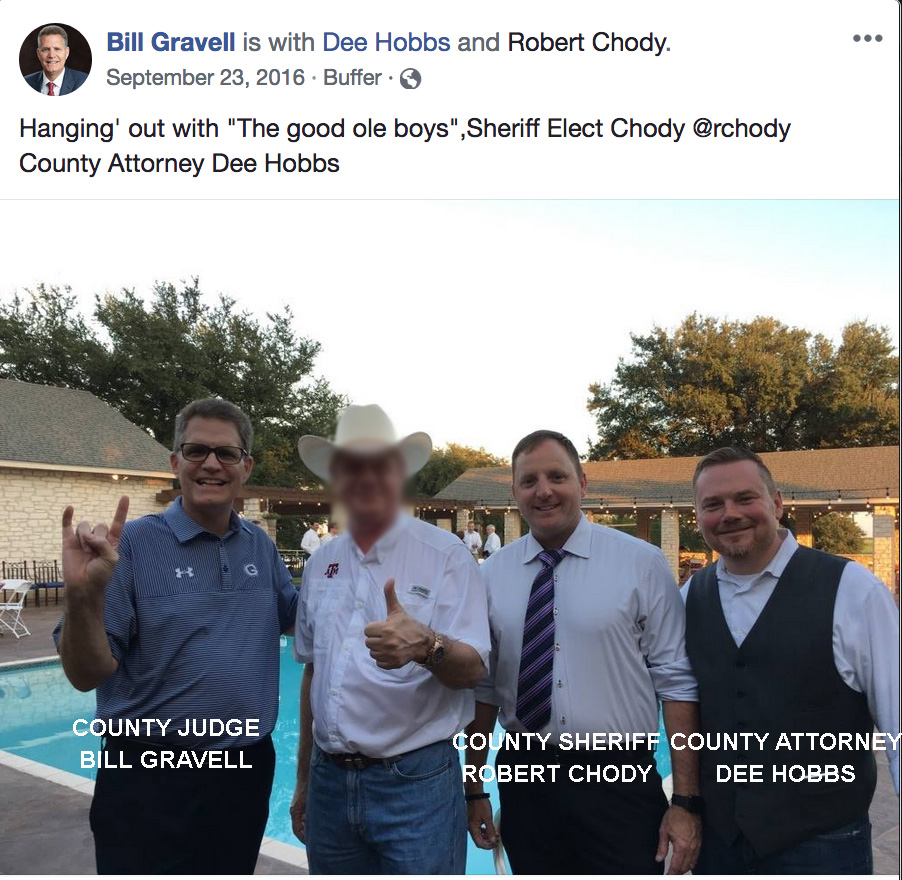 Williamson County Judge Bill Gravell has criminal compliant charges (more info) filed against him and due to DA Dick being a witness, the responsibility falls to CA Dee Hobbs to investigate. The question is, will he do the right thing?

We have reason to be concerned, as at least twice we have questioned his judgement. The first being when he filed a waiver to go ahead and pay Nassour the additional $29,000 he should not have been paid as a general counsel for Williamson County when he did not close his private practice after taking his job with the county.

Critics are questioning the private law practice of a Williamson County Attorney’s Office assistant, who earns a six-figure salary from his government job, the Austin American-Statesman reported.

Jason Nassour, a partner in law firm Keel, Nassour & Heilman in West Lake Hills, began working as general counsel for Williamson County Attorney Dee Hobbs in November 2017. As a private attorney transitioning to public work, Nassour, under state law, was allowed either to close his practice after completing pending cases or keep it open and take a 20 percent pay cut in his government salary.

But when Nassour began the steps of winding down his practice, he changed his mind.

“I was wrapping things up as quickly as I could and then realized certain things just don’t end,” Nassour told the newspaper.

That creates a thorny issue because Nassour is being paid above the state-designated threshold for a government attorney who continues in private practice. His salary should be capped at $112,000 rather than the $137,000 annual salary he currently gets, the Statesman reported.

Nassour earned $132,000 is his first year working for Williamson County, which he and Hobbs argue was allowed because he was in the process of closing his pending private-practice cases.

Hobbs told the newspaper he’ll ensure that Nassour doesn’t pass the salary limit for the 2019 fiscal year that ends in October. He said the county will file a waiver to keep the $29,000 difference between the state salary cap and what Nassour is actually on the books for.

The other, probably more concerning, issue was when he chose not to charge Sheriff Robert Chody with theft after Chody used county funds and personnel to maintain his private vehicle that he like to drive his friends and family around in parades. The reason? Hobbs found that, although Chody did what he was accused of doing, he did so without “intent to obtain personal benefit”. I suppose if you stole a chicken from HEB and gave it away, you could say the same. For that matter, if you stole a vehicle and gave it away you didn’t obtain personal benefit, so you’re good. It seems like “the law is what I saw it is” may be the case here.

You can read Hobb’s letter to Chody and to John’s attorney Robert McCabe here.

The lawsuit stated, “In February 2019 Plaintiff saw the County fleet manager working on Chody’s personal Polaris UTV. Plaintiff found out that the County had installed a County-purchased battery and kill switch on the Polaris, using County personnel on County time.”

A month later, according to the allegations in the lawsuit, the attorney’s office told Johns, “the County Attorney’s investigation determined what Plaintiff reported was true, but the County Attorney would not accept charges because Chody used the Polaris for Sheriff’s Office functions.”

What’s it gonna be this time, Hobbs? Are you going to do the right thing?