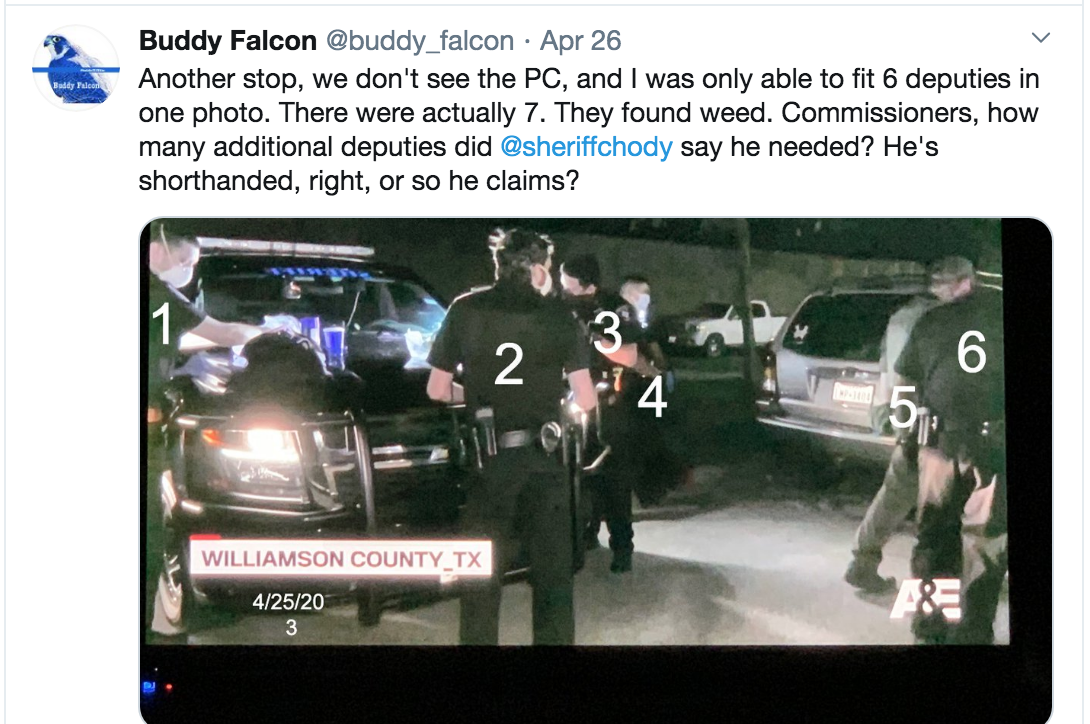 The following was received from a deputy that was part of LivePD filming.

I don’t know if you’ve talked to people who have actually had a camera crew in their vehicles. But I just watched commissioners court and I can state for a fact that I went to whatever calls I wanted to. And that was the order from Chody and the admin. AND I stayed in Taylor or Austin City most of the time because that’s where shit went down. Also just to give a perspective of how long ago I filmed and how many freaking charges have been dismissed..I filmed for months straight 3-4 days. So ALL those arrests dismissed. And I was NEVER informed to give the camera mans name because I was told I NEVER have to write a report. I did NOT write one report the months I filmed. I was told someone else would take care of it. And of course those people don’t know what camera man is in my car. So I feel Chody kept that from me (or us filming at that time) cause if I knew the only way I’d get these charges to go through would have been to give my camera mans name by God I would have gave it. Cops fucking hate when their cases are dismissed.

This call was for suspicious activity, not burglary. It was a realtor that called it in on an empty house and the door had been recently painted and stuck.

The departmental memo stating that deputies with the LivePD crew are not to be assigned calls, as the dispatcher and deputy stated.

The following was received from a dispatcher.

I had the experience of working with the department while they were filming with LivePD the first time. First of all, we were sat down and told of how things were moving in a positive direction for dispatch especially with Chody as Sheriff. As soon as I got onto the night shift and entered my first briefing about night shift, I learned of LivePD and what it meant for me as a dispatcher. Rules and guidelines constantly change in the dispatch world but it became clear that things were centered around LivePD specifically. Dispatchers knew of Sheriff Chody but would only hear from him on the radio during LivePD filming. We would get emails constantly, at least 3 to 4 times a week about LivePD, the assignment of special zebra numbers and which deputies would be logging on “extra” or moved from their positions throughout the county, just to work LivePD.
When I first worked Call 1 (the busiest channel in the county) on a Friday night, I had made the mistake of calling on a “LivePD” deputy to take a somewhat priority call. I immediately received a CAD message from the deputy about not being allowed to dispatch him calls and also Chody called up to speak to the supervisor asking about it. I was talked to after that about how I wasn’t supposed to dispatch them, even to high priority calls. Instead they would put themselves on calls without notifying me as their dispatcher (dangerous especially if other high priority calls are happening at the same time), they would take over the radio with their non-emergency traffic.
Multiple deputies would go on minor offense calls together to include fireworks calls that were initially called in as shots fired but immediately found out to be fireworks yet all LivePD officers still gathered to talk to each other and kids/neighbors in the area. It became very clear that the main focus on night shift was on LivePD and how they created calls or stirred up incidents to make the agency look good for tv. It was about putting certain deputies on duty and misusing resources for the sole purpose of gaining tv popularity. It was even taking deputies away from an already short-staffed agency and getting them to work LivePD for appearances which would in turn make response times to more rural calls, longer.
Those deputies mostly worked on one side of the county leaving the other side extremely short so when there was a high priority call on the other side of the county, it would force the few deputies working to have to go lights and sirens which also put their lives in danger. It caused way more stress on an already short-staffed dispatch center. If a newer dispatcher with little to no experience happened to be stuck working that channel while LivePD was working, it became so overwhelming for them that I watched as some got up crying and leaving the room. LivePD is a burden not only to the deputies that work it or are left to pick up the pieces but also to the dispatchers that are already in a high-stress environment.
It is very clear that Chody only cares about how he looks on tv and not about the employees or the citizens. He is willing to force areas of the county to be understaffed and the dispatchers to be overworked with his demands for LivePD.